Strawberry Joe at the Market - Wish Farms
Skip to content 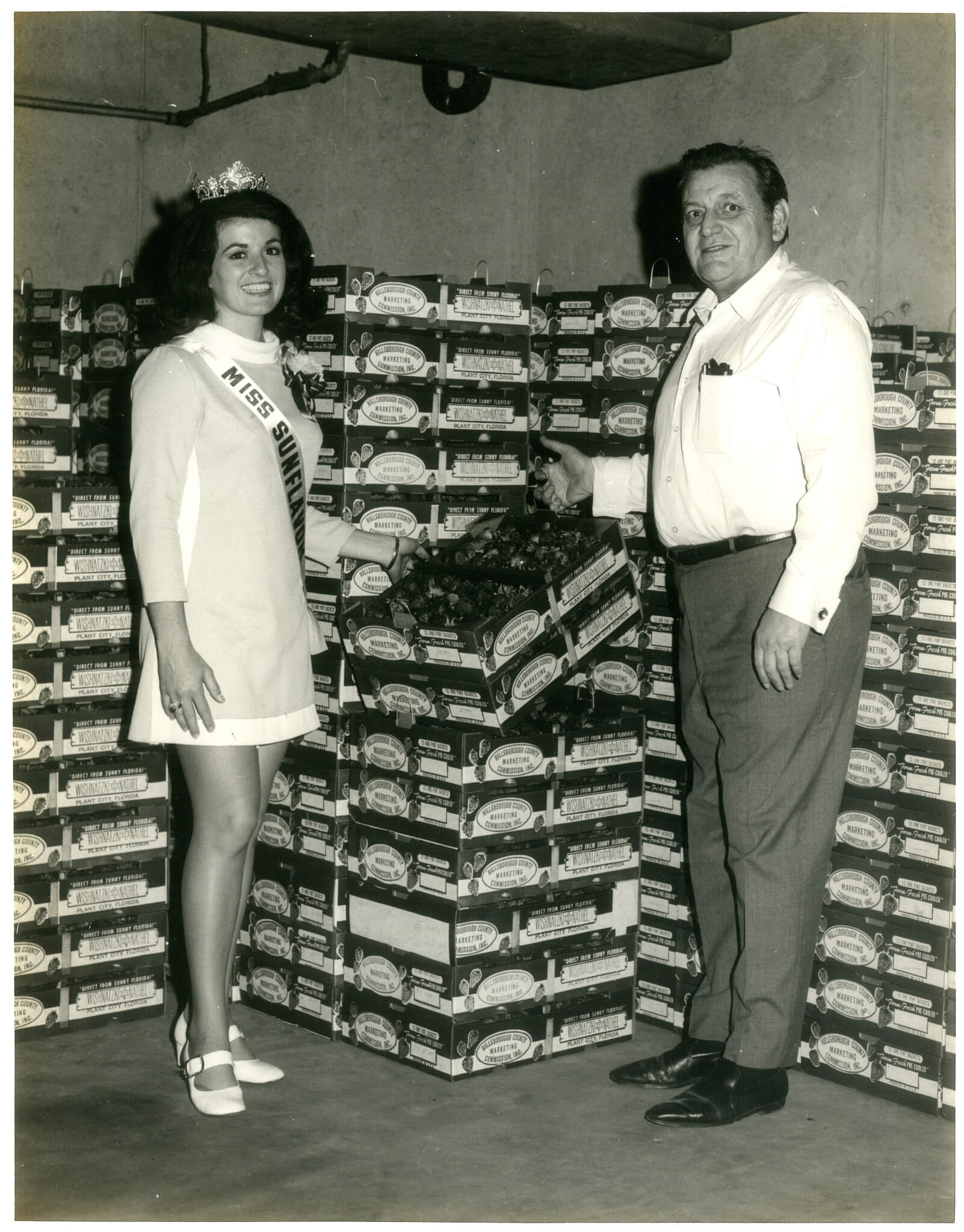 Strawberry Joe at the Market

Out of high school in 1937, Joe Wishnatzki went to work for his father in the Plant City, Florida produce business.  It was very demanding at times.  There were long hours when the crops were in full swing.  Just as now, the strawberries were the main crop during the winter.

Up through the 1950’s in Plant City the majority of the produce was sold at the State Farmers Market by auction.  There were literally thousands of small growers.  Few of the growers hired help.  The size of their family usually determined the size of their farm.  The more children they had the more they could plant and pick.  The school system in Hillsborough County had a unique schedule in those years.  They had strawberry schools.  That meant the kids attended school during the summer so they could be off and pick berries during the winter.

The double lines of growers bringing product to auction often was miles long.  One extended back into town and the other extended south towards the countryside.    A grower would get a ticket with the price on it from the successful bidder and then deliver it to that buyers shed or packinghouse nearby.  The grower would then get paid on the spot for the delivery.  Wishnatzki & Nathel was the largest buyer on the market.  Harris had the built-in New York business along with other customers he developed from other major cities.  They loaded railroad cars for New York, Chicago, Boston, Philadelphia, Baltimore, Washington, D.C., and Detroit all in the same day.

The railcars they loaded were specially built with ice bunkers.  The fans blew air across the ice to cool the car.  The ice was replenished along the trip at icing stations.

During strawberry season, young Joe would be on the market all day purchasing berries at the auction.  This was a chance for him to use his mathematical mind and “keep it exercised,” as he would say.  He kept a running average in his head of what he paid for the fruit.  On top of keeping this running average, he had to compete against other buyers.  The buyer had to inspect the fruit for quality before each lot went on sale.  He had to be alert and perceptive to know when a buyer may be close to filling orders or not so he could have a competitive average at the end of the day.  This is a feat that is truly mind boggling if you think about what he did.  All of the lots were small and sold by the pint.  There could be thousands of lots something like this:

He would keep the average in his head within 1/10 of a penny throughout the day.  By the end of the day he could have bought a thousand or more lots like the examples above.  Anytime during the day my Grandfather could send a messenger over to the market and find out what Joe’s average was.

Of course this was before the days of adding machines.  In the 1950’s they did get modern adding machines that worked with little wheels that turned after you punched the number into a lock position.  There was an addition button on the machine that tabulated the sum and then the button would pop back up.  There was no tape to check for errors.  At the end of the day all of the receipts were turned into two secretaries that had the tedious task of using their adding machines to get the totals and the average purchase price that young Joe already had in his head.  Usually after an hour or more of going through receipts they would announce their results to Joe.  I am sure they must have huddled and shuttered as they announced their answer.  When it didn’t agree they had to do it over again.  It happened more than once that the numbers didn’t match.  His mind was amazing.  Without fail his average was correct.

I witnessed his math skills years later when he would do a demo by adding 3 digit numbers that he would ask someone to write as quickly as they could on a sheet of paper.  I saw him do this trick many times adding a long column of numbers as the person wrote them.  When they were done, he would draw a line and write down the total.

Strawberry Joe was one of a kind!