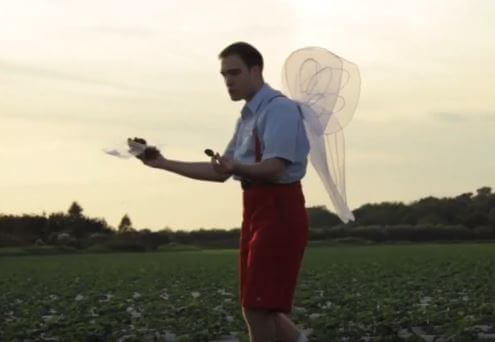 Once upon a time, we were known as Wishnatzki Farms, not Wish Farms.  In an earlier blog, I wrote about the thought process that brought us to the Wish Farms brand.  The part of the story that was not told was how we introduced it to the general public.  That was on January 18, 2010 with 4 offbeat videos we produced.

In case you did not recognize him, that was Nick Wishnatzki starring as Pixie Pete.

It started out as one video to introduce the brand, but there was so much B roll that came out of the video shoot that we decided to make it into 4-episode series.

The first episode “The Others” was introducing the pixie concept by suggesting there are others besides Misty the Garden Pixie.

Pete’s character was a tad dark, but it was all in fun.  My wife, Therese, later wrote the book “Misty the Garden Pixie” as a prequel to the videos.  It features Pete as a young pixie doing bad things.

Getting back to the video shoot; There was an incident that happened during one of the breaks from a long day of filming.  Nick and the fellow that played Pixie Jason, who’s real name is Ben, were standing outside the warehouse at G & D, our company farm, in the small town of Duette.  They were chatting and Ben casually lights a cigarette.  It was a short break, so both pixies remained in full costume in all their pixie glory.  A UPS truck pulls into the driveway of the farm.  The truck drives up and parks near where the two actors are hanging out talking.  The driver gathers a few packages and begins to walk to the office.  He stops dead in his tracks and does a doubletake at the two male pixies standing in front of him in full wings, with red shorts and suspenders.  He asks in bewilderment, “Did somebody lose a bet”?  I would have like to have heard this driver later describing the scene he witnessed.

We are headed for great things, with wings and all.